Bordered by two oceans and full of tropical rainforest, it’s no surprise that Costa Rica has a plethora of picturesque waterfalls.

The country’s beauty is no secret. During an episode of “The Simpsons” earlier this month, the family was on vacation trying to get the perfect Costa Rica waterfall picture. After all, as Marge Simpson explained, a selfie in front of a waterfall will make all your friends back home jealous.

The Simpsons never got their picture, but it wasn’t for a lack of options. Here are some of the best waterfalls in Costa Rica.

The Most Accessible Waterfalls in Costa Rica

Want to experience Costa Rica’s waterfalls with the whole family? These options are perfect for almost any traveler. 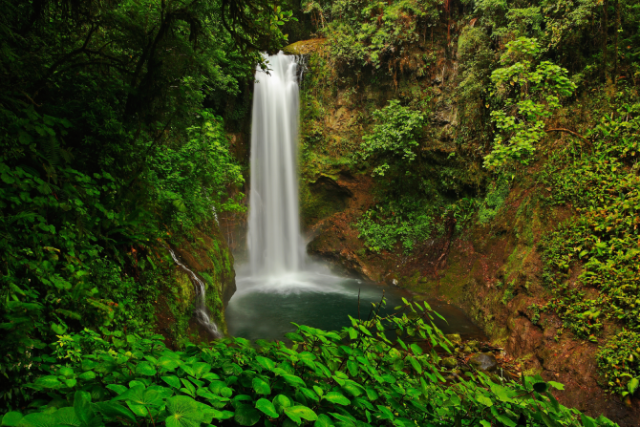 The property contains about 3.5 km of paved hiking trails, though you can walk significantly less if you choose not to see all five waterfalls. (There are stairs, so the paths aren’t wheelchair accessible.)

As a bonus, La Paz Waterfall Gardens also features a butterfly garden, an aviary, serpentarium and much more. You could easily spend an afternoon exploring the property — and many people do!

La Paz Waterfall Gardens is also a relatively short drive from Poás and Barva Volcanoes, and it’s on the drive from San José to Arenal Volcano, making it an easy addition to an existing trip.

In the shadow of Arenal Volcano, the Fortuna River Waterfall is a sight to behold. Slicing through the rainforest, the river drops thundering water off a cliff and more than 200 feet into a pond that’s ideal for a quick swim. 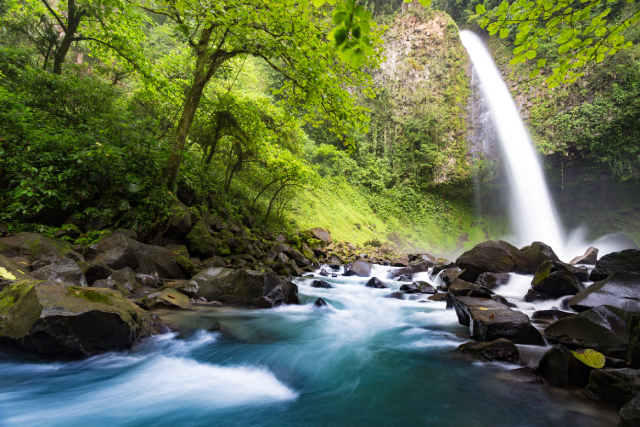 The property surrounding the waterfall is managed by the Integral Development Association of La Fortuna (ADIFORT), a non-profit organization, and they keep the attraction well-staffed and well-maintained.

After admiring the Fortuna Waterfall from an observation platform near the entrance, visitors start down 530 stairs through the jungle to experience the waterfall up close. That’s not a typo—there are more than 500 stairs to Fortuna Waterfall, and you’ll feel every single one of them on the way back up!

Fortunately, the stairs are paved and have handrails, and there are plenty of benches if you need to take a break. You certainly won’t be the only one who does.

The most adventurous visitors can wade into the freshwater lagoon created by the waterfall—there’s a lifeguard on-duty who will alert you where it’s safe to swim—or explore downriver, where the water is calmer.

Just be sure to save energy for the hike back up those stairs.

The province of Guanacaste, in Costa Rica’s northwest, is the country’s driest region. While there are plenty of gorgeous beaches on the Nicoya Peninsula, freshwater swimming is hard to beat.

Fortunately, the region is also graced with one of Costa Rica’s best waterfalls. 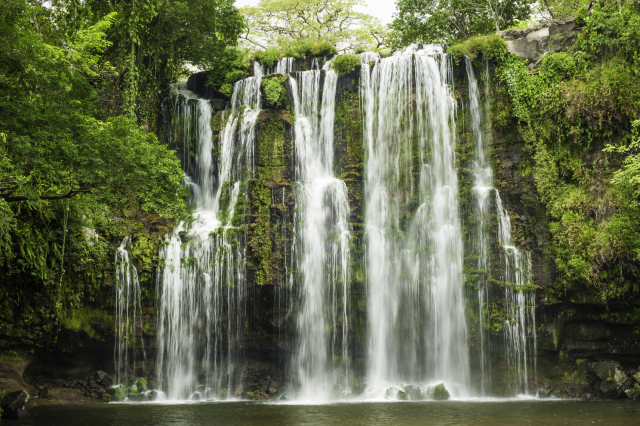 Llanos de Cortés waterfall is located in Bagaces, about 30 minutes outside the city of Liberia. Particularly pretty during the dry season, it cascades water down 40 feet into a large, calm pool that’s perfect for wading and swimming.

Since the municipality took control of the waterfall, it has constructed concrete steps to make access to Llanos de Cortés easier than ever. It also employs lifeguards who help keep visitors safe.

Once you’ve reached the waterfall, there’s plenty of sandy riverside that couldn’t be a better place for a picnic.

But don’t be afraid to jump in. After all, when the weather gets hot, there’s nothing better than a cool swim.

The Most Beautiful Waterfalls in Costa Rica

If you’re willing to put in a little more effort, these are some of Costa Rica’s prettiest waterfalls.

When you share a photo of the Rio Celeste Waterfall, be prepared to answer questions about whether you’ve used Photoshop to alter the image. 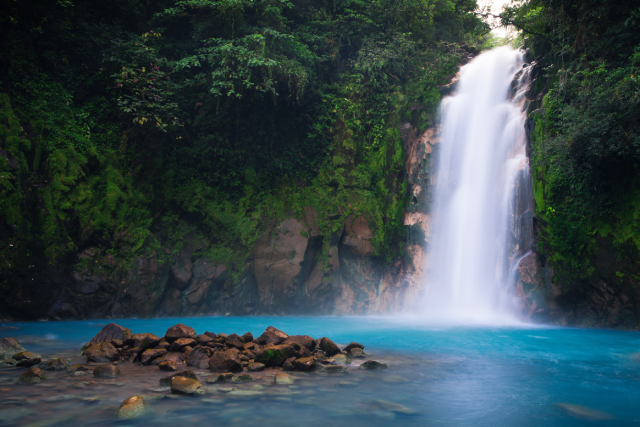 Located in Tenorio Volcano National Park, Rio Celeste gets its name from the striking turquoise color caused by the reflection of the sun off minerals in the water. It’s absolutely breathtaking, and the pictures you see here cannot do it justice.

There is a maintained path that leads directly to the waterfall, but it’s not entirely paved and can get quite muddy. It’s a little less than a mile, and trail conditions can make the walk slow-going.

Swimming in the national park is prohibited, but there is an observation platform where you can take postcard-worthy photos of the nearly 300-foot waterfall. And in addition to the waterfall, following the path will take you to a blue lagoon in the middle of the forest and to the tenidores—where you can watch the water’s improbable transition from clear to turquoise.

About an hour south of Manuel Antonio in Puntarenas province on Costa Rica’s Pacific Coast, the Nauyaca Waterfalls are an often-overlooked destination that is worthy of more attention. 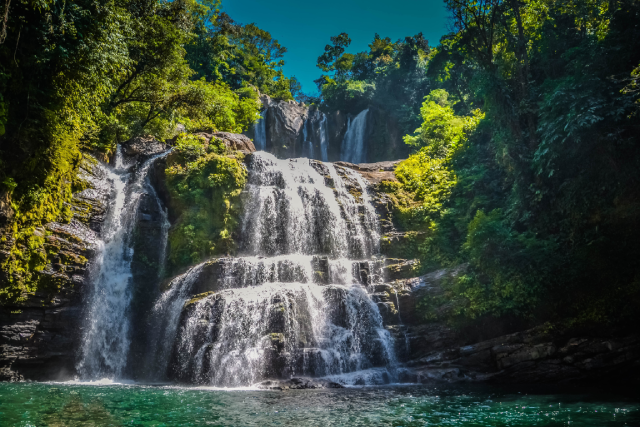 A two-stepped waterfall, the powerful first cliff drops water more than 145 feet, while the gentler second-tier showers it an additional 65. At the bottom of the Nauyaca Waterfalls is a large lagoon where, during the dry season, the water is calm enough to swim right up to the waterfall itself. (During the rainy season, though, it’s safer to stay on land.)

Visitors have several options to reach the Nauyaca Waterfalls from the property’s entrance. The most economical method is to hike the 2.5-mile trail, which follows an unpaved road. If you’re more pressed for time or not looking for a workout, you can enjoy a horseback tour to the waterfalls or hitch a ride in the bed of a truck.

No matter how you get there, the Nauyaca Waterfalls are magical and a worthwhile stop for anyone in the area.

So Many Waterfalls to Explore!

With so many rivers and so much mountainous terrain, Costa Rica has dozens of waterfalls that are worth your time. But it would take months to find and explore them all.

If you’re in Costa Rica on vacation, any of the waterfalls described here will make for an unforgettable destination. And because they’re located across the country, at least one of them can easily be added to most itineraries.

Just don’t forget to bring a camera. All your friends will be jealous — and you’ll make Marge Simpson proud.