When people think of Costa Rica, many think of surfing, sloths, beaches, and volcanos, but if you are a bird lover or a bird watcher, there are plenty of birds to find here.

Today, we want to discuss some wondrous birds that you may find in Costa Rica during your vacation because when you see them in the wild, soaring on their own, it truly is a magical experience that you will not forget.

How many Bird Species are there in Costa Rica?

Many birdwatchers will come to Costa Rica to explore the many species spotted, and there have been over 900 bird species spotted in Costa Rica. Did you know that Costa Rica is home to 10% of the world’s total avian population? Costa Rica has two times the number of birds as North America combined.

What Types of Birds Can I Find in Costa Rica?

While we can’t cover all 900 bird species here, we will lay out five beautiful birds that you need to watch when hiking through the rainforest, hanging at the beach, or walking through the cloud forest. 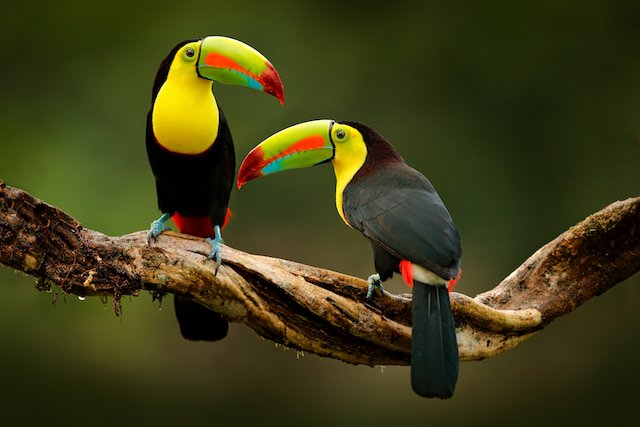 There are many toucan species, but the Keel-billed Toucans is one of the world’s most famous birds. Their beautiful rainbow beak sticks out in the forest. You may recall Toucans Birds are popular with a commercial mascot and a cereal mascot (What cereal? Do you remember Toucan Sam?)

You can see these toucans in Monteverde, the Caribbean side, and the Guanacaste mountains. 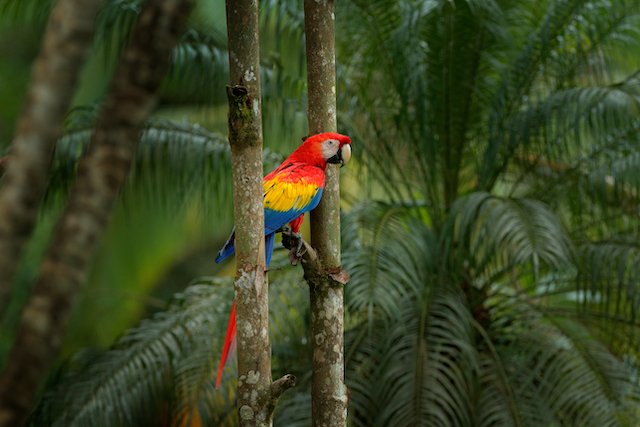 The Scarlet macaws are red, blue, and yellow parrots. You may not see them, but you will hear their high-pitched squawking. Look up. To see them soar in pairs, and watch them in the trees, shows how they work together as a pair.

You can see Scarlet macaws in the Los Suenos area, Carara Nation Park, Manuel Antonio, and Corcovado National Park on the Osa Peninsula. 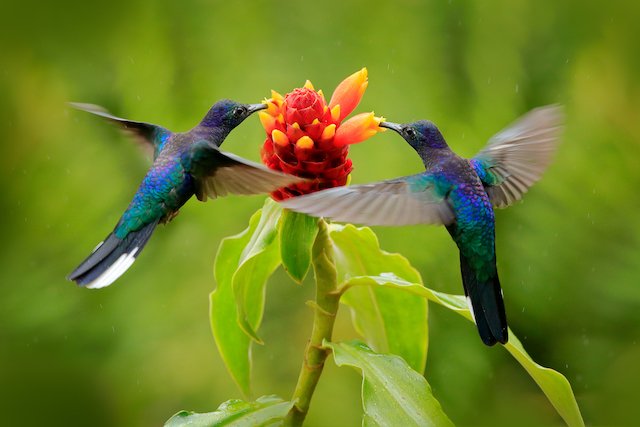 Did you know that the hummingbird was the smalled bird in the world? And that hummingbirds are only found in the Americas (North, South, and Central). Some of the hummingbirds in Costa Rica are some of the prettiest with their rainbow colors, blue, green, gold, and yellow, to name a few.

You can see Hummingbirds all over Costa Rica. And each region has unique species. For example, you may be sitting eating breakfast at the beach when you will spot a hummingbird trying to grab the nectar from a hibiscus flower. 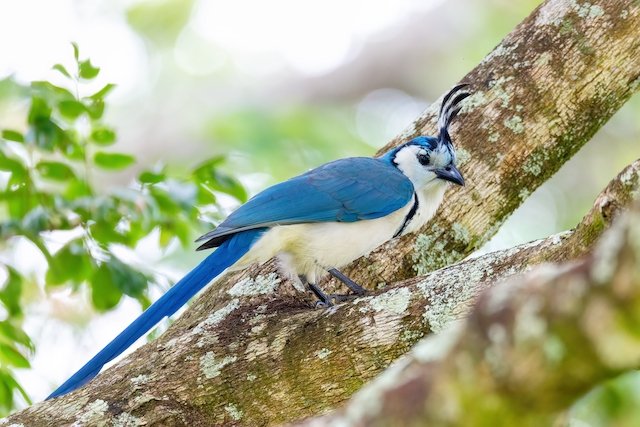 There are two types of Magpie-Jay species, black-throated and white-throated. You will recognize them as a significant North American Blue Jay if you are from the United States. They are curious and can be very noisy.

The Guanacaste Province of Costa Rica has the largest population of white-throated magpie-jays. You can also see them in different national parks of Costa Rica, such as Carara National Park and Rincon de La Vieja National Park, to name a few. 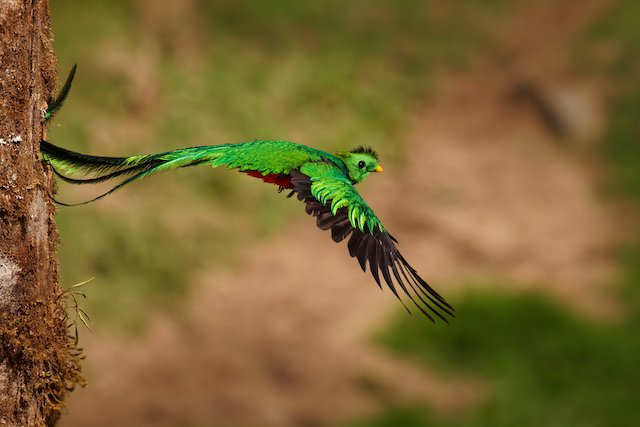 Interestingly, the resplendent quetzal is the national bird of Guatemala, but birdwatchers can see them here because the forest is more protected. When you see these birds, you think you see a beautiful emerald green, but in reality, they are brown. This is because they are colored by melanin, just as humans will get tan on the beaches of Costa Rica.

The most famous place to see Quetzals are in the Monteverde Rain Forest. You would be able to fly into Liberia or San Jose and connect with the rain forest, the volcano, and the beach all in a week to find these fantastic birds. 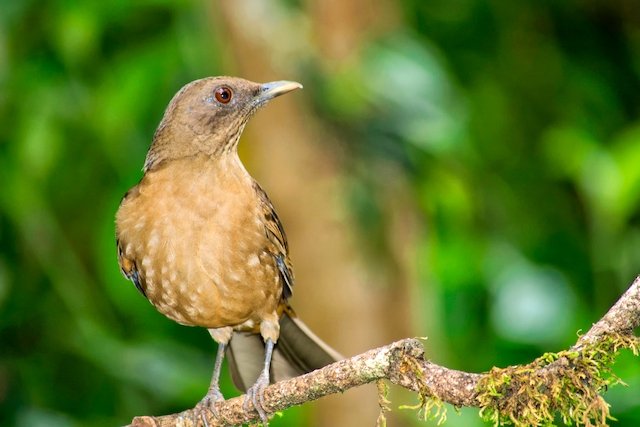 There have been numerous songs, and stories from Costa Rica, about this bird, hence why it became the National Bird of Costa Rica in 1977.

This bird was chosen as the national bird for several reasons due to its wide range of living close to humans has been mentioned in numerous Costa Rica songs, stories, and novels.

The mating season is from April to June, the rainy season in Costa Rica, and when the farmers hear their songs, they know that it is the first sign of coming rains.

What Is The Rarest Bird In Costa Rica?

The rarest bird in Costa Rica is the Jabiru stork. There are only 90 storks left in the wild in Costa Rica, and they only live in the basin of the Tempisuqe River. 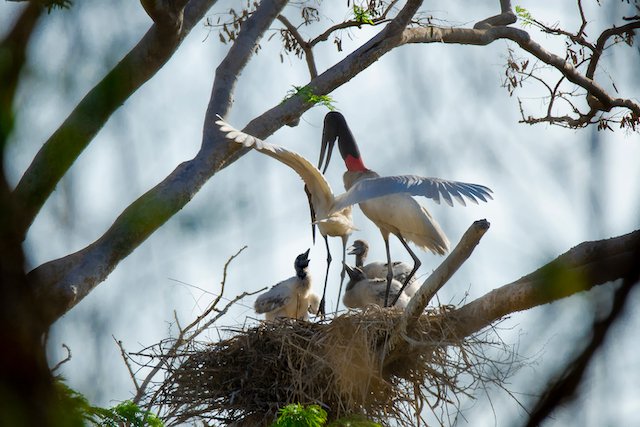 Where To Watch Birds In Costa Rica?

You can look at these places for a vacation and some bird destinations:

There are some fantastic tours for couples, groups, and families. It’s a beautiful combination to hike with the little ones and spot a Toucan.

When Do Most Birds Build Nests In Costa Rica?

March is the peak of the bird-nesting season in Costa Rica. It has been observed that birds will head out on dates, reproduce and nest at the end of January and around the middle of April. The rainy and dry seasons can play a role in this.

Birds of Costa Rica can be an experience on their own, even if you are not an avid bird watcher. There is so much more information that we did not talk about, but if you are into birding, you will be able to find a lot via the internet and numerous books in the bookstores.

Are you ready to “fly down” to Costa Rica to experience the beaches, the surf, the sand, the volcano, and the rainforest and explore where to find some of the most beautiful birds in the world?

Good. We would love to have you! Contact us today!