Every vacation has to start somewhere, and for most people visiting the country, it begins at one of Costa Rica’s airports.

More than 3.1 million tourists came here in 2019, and most flew into one of Costa Rica’s two major airports: Juan Santamaría International Airport (SJO) near the capital of San José, or Daniel Oduber Quirós International Airport (LIR) in the province of Guanacaste. And within Costa Rica, it’s often easier (and faster) to fly across the country rather than brave long drives on unfamiliar roads.

Planning travel is complicated, especially in a foreign country. We’re here to help you learn about flying in Costa Rica. 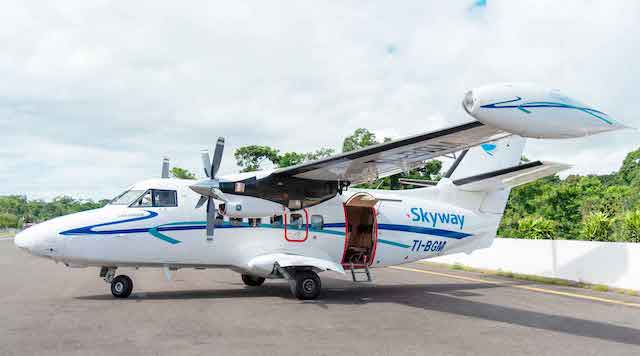 Where to fly into Costa Rica?

Costa Rica has two major international airports with scheduled service. If you are flying to Costa Rica from abroad, choosing a suitable airport has benefits.

Juan Santamaría International Airport (SJO) is Costa Rica’s largest and busiest airport. While technically located in Alajuela, it serves San José and the capital’s greater metropolitan area, home to about 50% of the country’s population.

Daniel Oduber Quirós International Airport (LIR) in Liberia has grown in popularity as tourism to the Nicoya Peninsula and Guanacaste province skyrockets. Today, the airport receives more than 1 million passengers yearly — up from fewer than 100,000 in 2003.

While not close to the beach, San José is the closest airport to Irazú and Poás Volcanoes. SJO is also the nearest international airport to popular Pacific Coast destinations like Jacó, Manuel Antonio National Park, and the Osa Peninsula.

But suppose you want the nearest airport to the ocean; flying to Liberia means you’ll land near some of the best beaches in Costa Rica — and not far from volcanoes and Guanacaste’s other natural attractions.

Both airports have modern terminals and amenities. And no matter where you fly, remember you’ll need a valid passport to enter Costa Rica.

Which airlines fly to Costa Rica?

Most major U.S. airlines fly to Costa Rica, as do several airlines from Europe and the Americas.

Here is a list of airlines that fly to Costa Rica and whether they offer routes to San José (SJO) or Libera (LIR):

Airlines usually offer more frequent flights to Costa Rica during the dry season, which corresponds with the busiest months for international tourism.

What are the costs of the airfare to Costa Rica?

As you know, it is all about the timing of when you come to Costa Rica. You will notice that the airfares are more expensive in the Summer Season (End of November to end of April and July) than in the winter months (May, June, August to October).

There have been some incredible deals directly with the airlines but make sure you get those deals earlier than later. Some flights to Costa Rica, from Houston, Texas, to Liberia in July, have been under $300, round trip for a week. You can’t get an AirBnB on the coast of Florida for a week for that price.

So, what do we suggest when looking for flights, and how much are you willing to pay?

First, check out the websites such as Kayak, Expedia, or Travelocity, to get an idea of what flights are available for a reasonable price. Second, go directly to the airlines themselves, as you may not have to pay an extra fee.

Costs from North America can range from $350 and up. Once again, it depends on when and which airport you are flying into. San Jose (SJO) will be a tad cheaper than Liberia, but Liberia is closer to the beaches, and you know what they say, “Time is money!”

Which airlines fly within Costa Rica?

Vacation time is precious, and flying to smaller domestic airports in Costa Rica can help you make the most of your visit. For example, a flight from San José to Puerto Jimenez, a town in Costa Rica’s biodiverse Osa Peninsula, takes 45 minutes. Driving that same route would take six hours.

Flying within Costa Rica is often the easiest way to reach scenic destinations like Drake Bay or Tambor from San José. The journey would otherwise involve a time-consuming ferry or boat ride.

Flying over Costa Rica can also be a unique way to appreciate the country’s beauty, so try to snag a window seat!

Some of the most popular domestic airports in Costa Rica are Quepos (near Manuel Antonio National Park); Drake Bay (near Corcovado National Park); Tambór, Tamarindo and Nosara (on the Nicoya Peninsula); and Golfito (in the South Pacific).

Recognizing the growing popularity of domestic aviation, the Costa Rican government has invested money in modernization projects at several of the country’s regional airports.

While Costa Rica’s domestic airlines offer service to more than a dozen popular tourist destinations, their route networks aren’t especially developed. That means the majority of routes are either to or from San José. For example, if you are flying from Arenal to Guanacaste, you may have a long layover in San José.

But domestic aviation is a growing industry in Costa Rica. The number of routes continues to increase, making all of Costa Rica’s beauty even more accessible.

Summary: Flying into and within Costa Rica

No matter what your Costa Rica itinerary entails, chances are it’ll start with a flight into one of the country’s two major international airports.

Liberia International Airport may be the better choice if you want the closest airport to the beach and Costa Rica’s beautiful Guanacaste province. If you plan to vacation elsewhere, San José receives cheaper airlines and better domestic connection options.

Once you’re in Costa Rica, you’ll be surrounded by natural beauty whether you drive or fly. And while the destinations in this biodiverse isthmus are worth writing home about, so is the journey.