Anybody in Costa Rica knows about Sarchí. It is in this small town, tucked in the hills of the Valverde Vega Canton of Alajuela, that many of the wooden arts and crafts that you can buy at souvenir shops and stores all over Costa Rica are proudly made. In fact, Sarchí was officially declared as the cradle of the national craftsmanship in 1983! 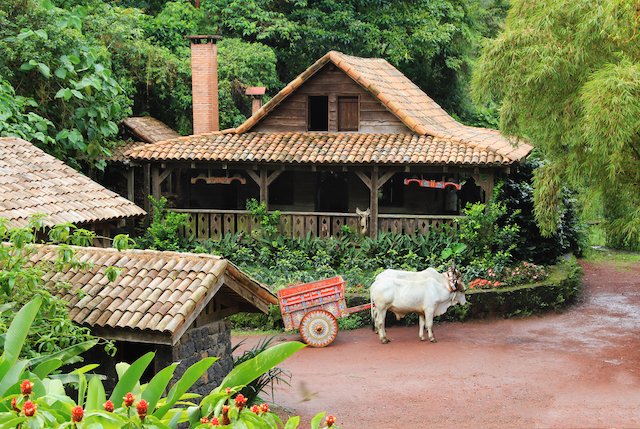 Both Costa Ricans and tourists can take a drive through Sarchí Norte and Sarchí Sur and pass a couple of hundred stores and workshops, mostly family-owned and run by several generations. At these stores, you can buy anything from small wood bowls to big types of furniture like beds or dressers.

It was in the late 1800s that big furniture started to be manufactured at Sarchí. The native craftsmen and women created a particular way of building furniture to the point that nowadays when you see certain dinner tables or rocking chairs you immediately know they are “Sarchí” style, and most likely made in Sarchí. As these wood workshops specialized more and more, they started making all kinds of beautiful small ornamental and functional wood craftwork.

But, the construction of furniture and wood crafts in Sarchí was the happy consequence of wood workshops that built oxcarts, probably the most important mean of transportation in Costa Rica for many decades since the early 1800s to close to the 1950s. The Sarchí oxcarts are also very special and unique, not only because of the building technique used there but mostly because they are decorated with beautiful paintings. And, it’s because of one particular oxcart that this town has its own page in the Guinness World Records book.

Where is Sarchí, Costa Rica?

Sarchí is located 30Km north from Alajuela. Driving there is very easy, and we suggest you do that so you can stop at as many stores and workshops as you want.

From Alajuela, or from San José, you have to take the Highway 1 north (Bernardo Soto Highway). After the exit to Grecia keep an eye for signs that will indicate the Sarchí exit. Drive on that secondary road for close to 7km until you reach the center of town. If you reach San Ramón on Highway 1, you have driven too far.

There are public buses that leave from the town of Alajuela every day. Also consider hiring a private tour, something we can help with as part of a Costa Rica itinerary.

What to Do in Sarchí, Costa Rica

Some History of Sarchí, Costa Rica & the Traditional Oxcart

It was in the first half of the 19th century that Costa Rica started exporting its (now) world-famous coffee. Back then, the roads that connected the coffee farms of the central valley with the country’s main port on the Pacific coast were so rough that only the power of massive oxen could transport the “beam of gold” stacked in sturdy carts. Back then, the voyage could take 10 to 15 days.

Those carts are today the Costa Rican National Symbol of Work, declared as such in 1988, and since 2005, a Masterpiece of the Oral and Intangible Heritage of Humanity, declared by the UNESCO.

Besides being the engine that moved the crop that put Costa Rica in the map, the oxcart has been awarded those two recognitions because they have always been a source of pride for the family that owns it but also for the craftsman that build it and the artist that decorated it.

The decoration of the oxcart didn’t start until the early 1900s, and each region used to have its own style of painting. The decoration that prevails over time has been the colorful pointing stars along the wheels, and the flower-like curves and circles along the body of the cart, and along the yoke. 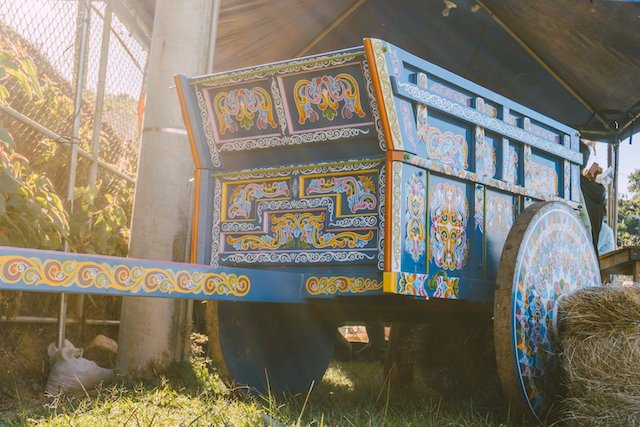 Another important element of the oxcart is that each one of them makes a unique sound, or “song,” as they ride. This song resembles a loud tinkle produced by a supporting metal ring on the wheel.

Today, the oxcarts are rarely used for transportation or land work, but they are always paraded at every celebration in almost any town in Costa Rica. Most of these oxcarts, which are now mostly decorating living rooms and terraces around the world, have been made and decorated in Sarchí.