Cartago is a centrally located province in the eastern portion of the country. It borders the provinces of Limón to the east and San Jose to the west. The city of Cartago makes an easy day trip from San Jose, and it is a great place to visit if you need to cool down. This province does not border an ocean but encompasses various volcanoes and mountain ranges, including the Talamanca Mountains that leads to the Caribbean Coast.

The city of Cartago is in one of the smallest provinces but contains the most Spanish Colonial era sites and cultural traditions as compared to the rest of the country. The highest peak in this province is Cerro de la Muerte at 3,600 meters above sea level. 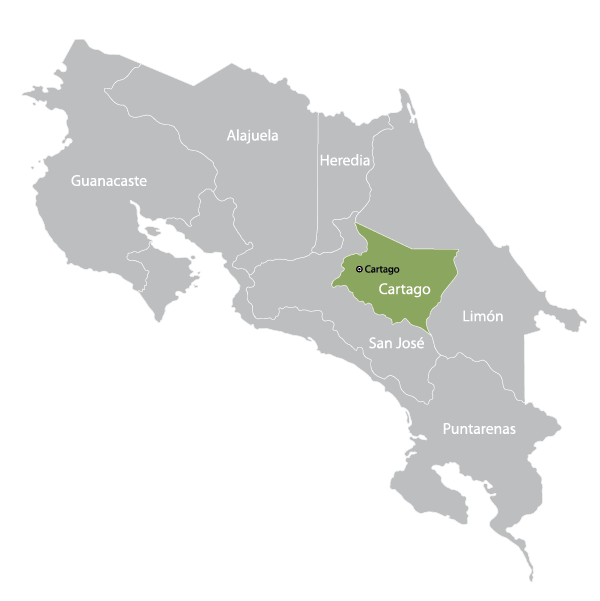 The History of Cartago, Costa Rica

Known as the old capital, the city of Cartago is famous for it’s deeply rooted Catholic ties and being the first successful establishment in Costa Rica. It served as the country’s first capital until 1823 when the capital was moved to the younger, more progressive city of San Jose. The city, along with many towns and villages in the province have been damaged numerous times by natural disasters including various earthquakes (1822, 1841, 1910).

The province of Cartago covers an area of 3,124.61 km and has a population of just under 500,000. It is subdivided into eight cantons and is connected to San José by two major arteries. Located in this province is fertile farming land dedicated to sugar and coffee plantations. Travelers can take a visit to these plantations to see coffee picking and production. Now, the province is starting to diversify its economy through a boom in technology and business. Cartago is now home to one of the most respected educational institutes in Costa Rica; the Technological Institute of Costa Rica.

Many Catholic followers or pilgrims, as they are referred to in Costa Rica, make an annual visit to Cartago to visit the massive Byzantine Basilica de Nuestra Señora de los Angeles. This Byzantine church hosts Costa Rica’s patron saint, the Black Madonna (La Negrita). Each year, many of these pilgrims recreate the voyages of their ancestors and walk for days from their homes to arrive in August to celebrate this Catholic Costa Rican holiday and to receive the healings of La Negrita.

According to Costa Rican legend, La Negrita was discovered in this exact location by an indigenous girl in 1635. The little girl brought the statue (shaped like the Virgin Mary) home numerous times only to have it disappear and then reappear on the rock where she had originally discovered it. The rock where she found it is now kept at the basilica and revered as a sacred relic and object of inspiration. It is common for visitors and pilgrims to touch the rock in reverence during their visit.

The Plaza Mayor in the city of Cartago houses the Santiago Apóstol Parish Ruins. These ruins are located close to the central park, five blocks west from the basilica. These are not real ruins but rather parts of an unfinished building, which was badly damaged by the 1910 earthquake caused by the Irazú Volcano.

These ruins were going to be the location for the official Catholic Church in Costa Rica, but the building of this church was “interrupted” various times due to natural and unnatural disasters. After the third interruption, it was deemed that something or someone was giving them a sign to not build the church in this location and they decided to leave the ruins as is and move west to the current location of the church and construct the church there.

The Irazú Volcano is Costa Rica’s highest active volcano at 11,260 feet (3,432 m). It sits to the north of the city of Cartago, and west of Turrialba. The last major explosion of this volcano was in the 1960s but occasionally you will see a small lava flow.

The volcano’s summit has several craters, one of which contains a green crater lake of variable depth. The volcano is encompassed by a National Park and is easily visited from surrounding areas and towns, with a paved road leading to the summit and walk around the craters. There are trails to explore at the top and on a clear day, something that is somewhat rare in Costa Rica, it is possible to see both the Atlantic and Pacific Oceans.

Turrialba, a quiet town in this province is home to the active Volcan Turrialba. The volcano is currently closed to tourists at this time as it had recent eruptions in 2008 and 2010. Located in the foothills of this volcano and about 20 kilometers from the town is the largest preserved ruins in the country: Guayabo National Monument. This park is open to the public and hosts an important archeological site with evidence of Pre-Columbian culture. At this archeological site, you will see remnants of roads, aqueducts (that are still working today) and highly developed stone art of human and animal forms. Guided and self-guided tours are available from the staff at the monument’s park.

Things to Do in Cartago, Costa Rica

A highlight for naturalists and botanical lovers is a 27-acre garden which holds approximately 3,000 different plant species including an ornate collection of rare orchids. This spectacle of natural beauty can be found at the Lankester Botanical Gardens just 2.5 miles outside of Cartago. On this property, there are well-kept trails for visitors to wander and visit the various greenhouses.

In the city of Cartago, you can spend some time in the Cartago Central Market where you will find great local lunch options and fresh produce. If you have a taste for artisanal beers, visit Costa Rica’s Craft Brewing Co. This brewery offers a tour that comes with samples. Be sure to try the Libertas Golden Ale or the Segua Red Ale.

Cartago is home to arguably the best rafting in Costa Rica. A trip down the Pacuare River is one not to be overlooked. Commercial white-water rafting trips can be planned for 1 day or multiple days with a stop overnight in one of the numerous well-kept eco-lodge that exist on the river’s shore.

On the rafting trip, you will paddle through a remote and active Indigenous Biological Reserve. On multi-day white-water rafting trips on the Pacuare, travelers can explore this preserve from their eco-lodge with a canopy tour, waterfall rappelling (also known as canyoning) or taking a hike or horseback ride to remote waterfalls. The Pacuare River is at the top of our must-see and must-do list. Unfortunately, at this time, there are large hydroelectric projects in plan and even a few underway, so be sure to visit before the waterways are affected.

Turrialba and the surrounding areas also offer mountain bikers and road cyclists unique opportunities to get out and peddle through the gorgeous countryside of Costa Rica. Mountain Biking and cycling in Costa Rica is quite different than in other places in the world. It is not for the casual biker as the trails are rough and the mountains are steep. Cycling tours can be arranged in the area and seeing the province of Cartago from the seat of a bike provides for an unforgettable experience.

To many, Orosi is an undiscovered paradise in the Cartago province. In this secluded valley, you will find the oldest church in the country still in use today. The San Jose de Orosi church was built in 1743 and is built in the Spanish-colonial architectural style. Here you will also find the Reventazón River which flows by Cartago. This is another great place for whitewater rafters and kayakers. The Reventazón River provides San Jose it’s drinking water and flows from the steep winding mountaintop to the Cachí Dam. With the abundant water in the area, you can find breathtaking waterfalls and relaxing hot springs.

Considering a Trip to Cartago?

All of our sister company, Costa Rica Explorations, programs operate in this province. The Secluded Caribbean itinerary makes a stop in Cartago and includes a multi-day rafting trip on the Pacuare. A visit to the province of Cartago is an easy-add on for any of our itineraries. Due to is relative close proximity to San Jose, a night or two to experience the culture of Turrialba, Orosi or Cartago can be added on to the beginning or end of virtually any itinerary. The white-water rafting trip on the Pacuare River is must-do activity in Costa Rica for teenage and adult travelers.