Indigenous communities called it the “hill of tremor and thunder.” Costa Ricans today simply refer to it as “The Colossus.” No matter the name, Irazú Volcano is a sight to behold, and these days it is much more accessible than nearby Poás Volcano.

Standing 11,260 feet above sea level, Irazú Volcano is Costa Rica’s tallest. And located less than 90 minutes from San José, it’s a worthwhile trip for anyone searching for an adventure vacation activity in Costa Rica. 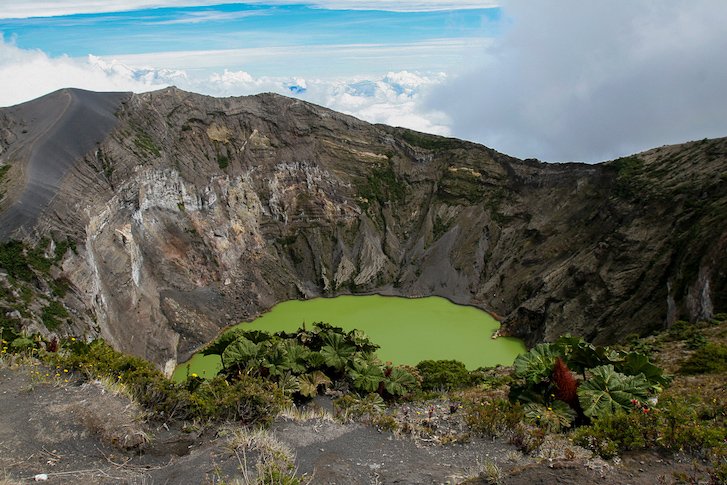 Is Irazú Volcano Active? How old is Irazú?

Make no mistake: Irazú Volcano is active. Virtually any Costa Rican could tell you about the stratovolcano’s explosive history.

Irazú Volcano has been dated at more than 850,000 years old and has registered at least 23 eruptions since the governor of Cartago province first documented activity in 1723.

The most famous of those eruptions began in March 1963, when John F. Kennedy visited Costa Rica. The United States President left after a few days, but Irazú Volcano’s eruptions continued for two years, coating San José and much of the country in ash.

Costa Ricans still have a respectful relationship with The Colossus, given its history of disruptive power and its proximity to the capital.

These days, though, the volcano is much more dormant. Since 1994, its principal activity has been fumaroles (sulfurous gases) on the northern side of the main crater. Costa Rican volcanologists constantly monitor the volcano and have made strides to turn Irazú Volcano National Park into a safe and unforgettable experience for visitors.

Where is Irazú Volcano?

Irazú Volcano is located about 25 km northeast of San José, in the province of Cartago. It’s about a 90-minute drive from the capital.

Whether you’re driving yourself or visiting as part of an Irazú Volcano tour, you’ll have excellent views over the entire Central Valley as you follow the winding roads through coffee plantations up the volcano. It’s not uncommon to find Costa Rican families picnicking next to the street at particularly scenic spots!

From the top of Irazú Volcano, you can see both the Atlantic and Pacific Oceans on clear days. With a telescope, you might even catch a glimpse of Lake Nicaragua. It’s frequently cloudy — often to the point of obstructing views of the crater — but the earlier you arrive, the better your chance at a spectacular sight.

Due to the elevation, Irazú Volcano is often quite cold, with average temperatures under 50 degrees Fahrenheit. Make sure your Costa Rica packing list includes long pants and a light jacket. But apply sunscreen, too, since your skin will burn more easily at 11,000 feet.

At the entrance to the National Park, amenities include monitored parking, a cafeteria, bathrooms, and a small gift shop.

What to do at Irazú Volcano National Park & Nearby?

A trip to Irazú Volcano National Park is easy to include in almost any Costa Rica vacation itinerary, and we can help schedule your Irazú Volcano tour to make sure you get the most out of the visit.

On the drive through Cartago, history buffs will love the Santiago Apóstol Parish Ruins, which serve as a monument to a 1910 earthquake that flattened the city. The downtown site was meant to house Costa Rica’s Catholic Church, but it was destroyed four times throughout the building process. Finally, after the 1910 tremor, locals took the earthquakes as a heavenly omen and built the church elsewhere.

As you wind your way up Irazú Volcano, you’ll pass by the Duran Sanatorium. The medical facilities, which closed in the 1960s, are said to be one of the most haunted places in the country. Enjoy the visit — if you dare.

The Sanatorium is near the entrance to Irazú Volcano National Park’s Prusia Sector, which contains several miles of hiking trails through thick forest, perfect for nature lovers. The trails are well-maintained (though not handicap accessible) and feature lookouts. If you’ve spent your Costa Rica vacation in jungles and on beaches, there’s nothing like the crisp mountain air.

Of course, the principal attraction at Irazú Volcano National Park are the volcanic craters. From the national park’s main entrance, you’ll be directed up a short, paved trail to the lookout. While the first crater you’ll pass is dry, Irazú Volcano’s main crater is filled with a lake of a seemingly impossible shade of blue.

Near the paved trail is a flat terrace known as Playa Hermosa, or beautiful beach, which sometimes fills with a small lake of its own. You’re free to explore it and the surrounding vegetation. When the clouds roll in, the wind-swept terrain looks as if you’ve been transported to the moon.

Finally, you can hike or drive a gravel road to the National Park’s highest point for different views of the craters and of Costa Rica below you. While most people walk to the summit, you’ll definitely feel the altitude as you trek uphill, so don’t be surprised if every step feels extra difficult!

The lookout points for Irazú Volcano’s craters keep visitors at a safe distance, but that means clouds can obscure the sights. While it’s impossible to predict the weather, park officials recommend arriving as early as possible to maximize your chance for a clear view.

For thousands of years, Costa Rica’s inhabitants have lived in the shadows of an active Irazú Volcano — the hill of tremor and thunder.

Today, thanks to its (relative) inactivity and advanced safety measures, peering into Irazú Volcano’s craters and over Costa Rica is an easy, accessible day-trip from San José and the rest of the Central Valley.

Whether you want to see the craters for yourself or prefer to hike through the high-altitude forest in the Prusia Sector, Irazú Volcano is an iconic part of any Costa Rica visit.

Plan a Trip to see Irazú Volcano in Costa Rica!

We can create a custom Costa Rica itinerary for anyone looking for a unique trip to this beautiful country and its volcanoes. Please use the contact form below to inquire about planning a trip.