Just northwest of the capital city of San Jose and nestled in the foothills of the Barva Volcano is Heredia, a province rich in vegetation and coffee plantations. The area borders the provinces of Limon, Alajuela and the country of Nicaragua to the north. 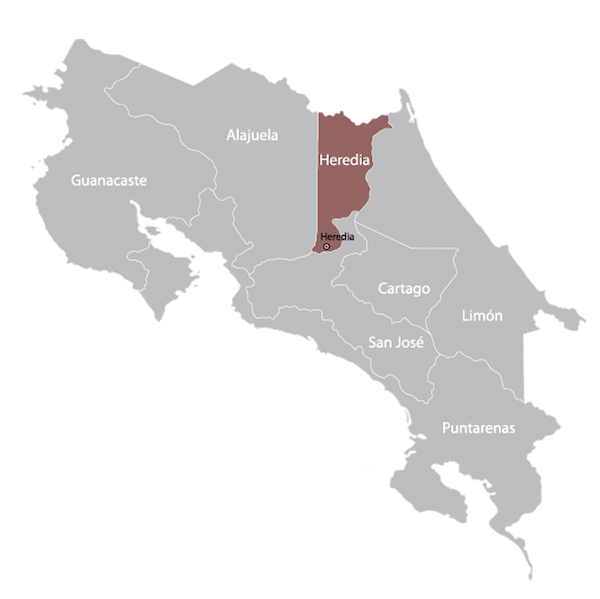 In the stretch of what is the Heredia province, you will find primary forests, tropical dry forests, montane forests, and subalpine forests. The topography in the area is an ideal location to grow coffee, sugar cane, beans, corn and to have dairy farms. With the fertile land and an ideal location to ports in the Limon Province, Heredia has become a notable distribution center of agricultural goods throughout the country and Central America.

The area is noted for the beauty of its local vegetation that inhabits the province. The city of Heredia is often referred to as the “City of Flowers”. Throughout the province you will encounter quaint, small towns amongst plantations and forests. Just a short distance away are many beachfronts for the ocean-goers. The climate in the Heredia province is generally warm and mild year-round with the rainiest season extends from May into October.

Prior to the establishment of the town of Heredia, the area was populated by the native tribe, the Huetares. Today, locals are referred to as Heredianos. Locals and visitors all interact with one another on a regular basis due to The National University, the largest international school in Costa Rica, being located in Heredia. The National University is known for being the best veterinarian program throughout Central America. This school hosts national and international students bring creativity and diversity. The area has been influenced by this gathering of students and has brought many local cafes, movie theaters, live music, ice cream shops and an array of nightlife for visitors.

Founded in 1709 Heredia still has remnants of rich colonial architecture. One of the most historic landmarks of colonial architecture in the area is in Central Park (Parque Central), where you will find one of the oldest churches in Costa Rica, La Inmaculada Concepción. The church was built in 1797 and still has it’s original bells which were imported from Peru. In addition to this historic monument, the semi-shaded Central Park dotted with mango trees, has many amusements for tourists. One of the favorite activities for locals and visitors is to enjoy the lively atmosphere that accompanies the nearby plazas, restaurants, and stores. If you are at the park at the right time you may be lucky enough to catch a concert or performance going on by the park stage.

If you travel just northeast of the park, stop in for some culture and history at the House of Culture (La Casa de la Cultura). Once home to President Alfredo González Flores (1913-1917), the residence now houses interesting pieces of historical and artistic significance. In the town, you can also see a Spanish built brick tower hovering over the city called El Fortín. The tower of this fort was erected by the governor Fadrique Guiterrez, in 1876. The governor had a passion for military history and sculpture. While the building is quite impressive, it does have several design flaws. Fortunately for Heredia and the tower, El Fortin has never been put to the test in battle.

Things to do in the Province of Heredia

Barva is a small charming town with historic significance just north of Heredia. This town was first founded in the 16th century. Many homes are built with a red-tiled adobe. Barva has been noted as a national historic landmark in the region. For history buffs, visit the Barva Basilica. This church built in 1767 has a courtyard and grotto dedicated to the Virgin of Lourdes. For a culinary experience, visit the Café Britt coffee plantation where you can get an educational tour of the sustainable practices of this famous Costa Rican coffee plantation.

From Barva, you can get into the Braulio Carillo National Park (Parque Nacional Braulio Carrillo). This area makes up a large piece of the Heredia Province. The Braulio Carillo National Park was founded in 1978 to protect the area from the development of an incoming highway. The protected zone encompasses 108,970 acres and is Costa Rica’s second largest national park. It received its name from Costa Rica’s third president, Dr. Braulio Carrillo. The area protects a cloud rainforest and a system of rivers. This large park has one of the highest levels of diversity in Costa Rica. For those going out on a long hike be sure to bring layers as the higher altitudes in this park can drop to freezing temperatures in the evening.

At Braulio Carrillo National Park, you will find many hiking trails that wind around six major rushing rivers, where you can get in some serious bird watching. With waterways nearby, you have a chance to view diverse wildlife like otters, sloths and fish and a rich diversity in plant life. The most venomous snake in Costa Rica, the Matabuey (“bushmaster”), lives in these parts so hikers keep an eye out for where you step and stay on the trails.

The Barva Volcano is also located in the park and is the highest peak in the area standing at 9,534 ft. This impressive volcano is often referred to as Las Tres Marias or the Three Marys due to it’s three most distinctive peaks. There are several spots of this volcano that are still active but that does not stop people from enjoying a nice picnic in the nearby small town of Sacramento.

On the southwestern border of the Braulio Carrillo National Park is a 170-acre private refuge called Cerro Dantas Wildlife Refuge. Here you can step into the diversity of Costa Rica’s habitat while strolling through hiking trails suited for beginners to experienced. If you are searching for toucans in Costa Rica you will be sure to find them in the Toucan Rescue Ranch. This facility rescues not only toucans but also owls, sloths, kinkajous, and spider monkeys. While in the facility the animals go through a rehabilitation program so that, if possible they can be returned back into the wild.

Considering a Trip to Heredia?

Let us assist. Many of our itineraries pass through the province of Heredia en route to Arenal and/or the Caribbean Coast. Driving the Braulio Carillo Highway is a fascinating marvel that can be quite an adventure; therefore, we always recommend taking professional transportation to cover this area of the country that receives a great deal of rain and the occasional mudslide. If you’d like to coordinate a visit to Barva, Heredia or the National Park to further explore, please inquire about one of our custom vacation itineraries to Costa Rica.

You can always contact us about where you’d like to visit in the province of Heredia, and we would be happy to help you customize an itinerary to your needs.