Limón is Costa Rica’s eastern-most province and encompasses the entire Caribbean Coast from the San Juan de Sur River in Nicaragua in the north all the way to the Sixaola River to Panama in the south. The province covers an area of 9,189 km², and has a population of just under 400,000 people. 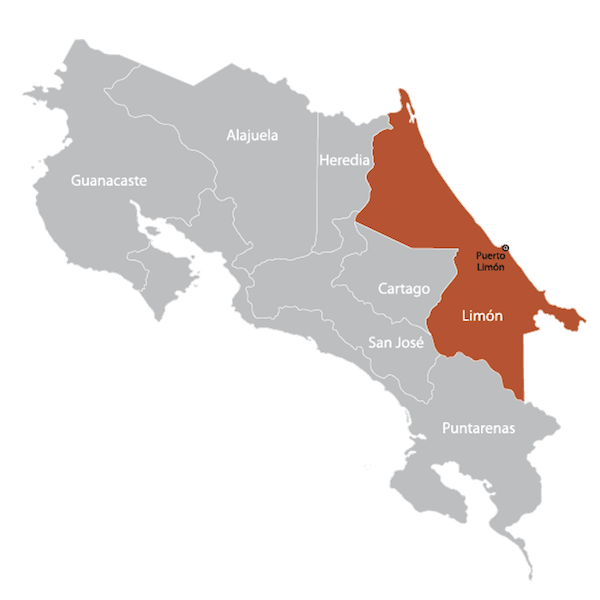 Limón’s territory is situated in the country’s Caribbean lowlands and includes coastal beaches and mangrove swamp areas. The Cordillera de Talamanca (Talamanca Mountain Range), which is considered the most undiscovered area in all of Costa Rica is located in the southwestern portion of Limón and includes some points of high elevation within the foothills and mountains of the relatively unexplored and undiscovered area. Within the province, there are six cantons, or counties, that make up Limón. Each one of these cantons is unique and boasts its own cultural identity.

The History Behind Limón, Costa Rica

Limón is rich in history and played a huge role in the agricultural revolution of Costa Rica. On his fourth and final voyage to the Americas in 1502, Christopher Columbus was the first known European to visit Limón. He stepped foot on the Island of Uvita, located less than a mile off the shore of present-day Puerto Limón, Limón’s capital city. The Spanish tried but eventually gave up the idea of colonizing the Caribbean lowlands and instead chose to explore the central valley and Pacific regions.

The United Fruit Company laid the foundation for the current local economy and agriculture that exists in Limón. Major banana producing corporations and export companies like Dole and Chiquita have operations in Limón where the crops are grown, packaged and shipped to consumers. Although the initial fruit company has long been dismantled, banana and plantain exports remain one of the region’s top sources of income, as well as the ports of Limón, and tourism.

Getting to Know Puerto Limón, The Capital

Puerto Limón, which is more commonly known simply as Limón, is the capital city and main hub of the province. The capital city of Puerto Limón has a population of about 70,000, which includes the outlying towns and surrounding areas.

The city is a very diverse and multicultural community. Much of the community’s roots date back to Jamaican and Chinese laborers who worked on the railroad projects that connected San José to Puerto Limón. These laborers then stayed in the area, which is what gives it much of its cultural identity to this day. The predominantly Afro-Caribbean community speaks Spanish and Limonese Creole, locally known as Mekatelyu.

Puerto Limón contains two port terminals, Limón and Moín. These two ports are where the vast majority of Costa Rican exports and imports enter and exit the country. They are also home to the ever-increasing cruise ship industry.

Perhaps the most popular destination in Limón is Puerto Viejo (Old Harbour), which is known for its easy-going, beach-based tourism. It is home to the famously long surf break, Salsa Brava (AKA “intense sauce”) as well as lots of internationally inspired Caribbean fusion restaurants. Surfboards and laid-back partying are the two main activities in the center of town. Renting bikes is one of the most common forms of transportation, and it’s very inexpensive.

Just north of Puerto Viejo is the somewhat more traditional small town of Cahuita, which is home to Cahuita National Park, a protected area that extends along the coastline with sandy trails and exclusive beach access.

South of Puerto Viejo is the beachfront strip of town known as Manzanillo, which is protected along with the jungle and ocean that surround it as part of the Refugio Nacional de Vida Silvestre Gandoca-Manzanillo. In between Cahuita to the north and Manzanillo to the south, there are a number of Caribbean-inspired restaurants, bungalow-style hotels, sloth and wildlife refuges, and, of course, palm-tree lined beaches.

Another fabulous destination is the laid back coastal village of Punta Uva.

The Culture of Limón, Costa Rica

Limón is considered one of the most unique and culturally diverse of Costa Rica’s provinces due to it being the home of significant Afro-Caribbean and indigenous populations. Reggae and calypso music are ubiquitous in the region and several international talents have their roots in the province. Mekatelyu is a reggae fusion band that has toured internationally to great acclaim. And even in his 80s, the world-renowned folklorist Walter Ferguson continues to sing his humorous calypso songs in the small town of Cahuita on weekends.

You will also find the largest amount of Chinese people living in Costa Rica throughout Limón. This dates back to the days of the United Fruit Company and the bridge building skills and techniques of the Chinese that were called upon in this region to complete the railroad. As a result of all of these influences, it’s not uncommon to see signage in Limón in Chinese, British English, Maketelyu, and Spanish.

Puerto Limón plays host to a major festival during the 2nd week in October. The festival is called carnaval and pays tribute to local community leader and activist, Alfred Josiah Henry Smith (known as “Mister King”). Mr. King organized the first inaugural carnaval in October 1949. The event celebrates Columbus Day or Día de la Raza on October 12. Activities include parades, food, music, dancing, and, on the last night, a concert headed by a major Latino/Caribbean music act in the central park known as Parque Vargas.

Local cuisine incorporates lots of ingredients native to the region such as coconut, plantains, and pineapple. The famous “rice and beans” is a dish of coconut infused rice and beans with a chicken leg all smothered in a coconut-infused brown sauce, accompanied by fried sweet plantains. Another likely menu option is the fresh catch of the day served fried or in a stew of coconut milk called “rondon.” These dishes are most often served with a fresh-squeezed limeade or a glass of cacique (a clear rum) with a lime wedge.

Limón’s climate does not adhere to the dry-wet season cycle of the rest of the country. It rains throughout the year, though the driest months tend to occur in September and October.

Considering a Trip to Limón?

Let us know where you’d like to go and we’d be happy to put together a memorable vacation itinerary for you.