Costa Rica is full of contrasts and vibrant colors, but nothing that you might have heard will prepare you for this country’s Caribbean coast. Step out of your bus or car in the Caribbean beach town of Puerto Viejo, located about an hour’s drive from the port city of Limón, and you’ll feel that you are in a different country, Jamaica perhaps. 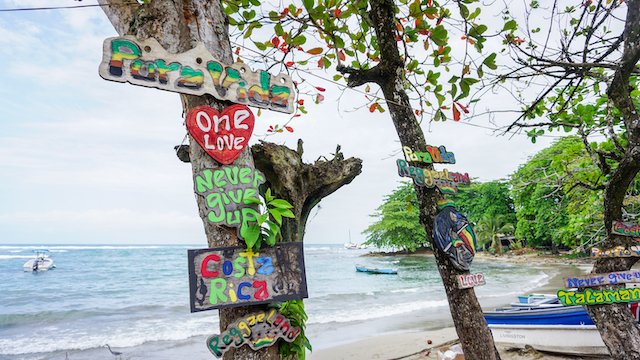 There is a different rhythm of life here, even slower than “Pura Vida”, and if you came to Costa Rica to relax, you can rest assured that you will accomplish your mission in Puerto Viejo.

The combination of gorgeous beaches, a collection of restaurants so deliriously good that you might just have to extend your stay in Puerto Viejo, and the relaxing sound of reggae tunes slipping in and out of earshot as you roam around this town translate into vacation bliss.

One of the first things you might notice about Puerto Viejo de Talamanca (not to be confused with Puerto Viejo de Sarapiquí, in Costa Rica’s Northern Zone), is that English is widely spoken here. This is not just a result of the crowds of tourists that visit Costa Rica’s most popular Caribbean beach destination every year, but rather of the town’s history.

British settlers originally called Puerto Viejo “Old Harbour”, and the town, as most of the Caribbean coast, was populated by freed Jamaican and Chinese slaves that were brought to the country in the late 19th century to build a railroad connecting San José to the port in Limón. Bananas were planted along the railroad tracks as food for the workers and soon, the U.S.-owned United Fruit Company seized the opportunity to turn bananas into Costa Rica’s top export.

In the early 1900s, a banana plague shut down the United Fruit Company’s Caribbean operation, which moved to the country’s Pacific coast. Afro-Caribbean workers were not allowed to leave Limón province until 1949, however, so the isolated area was struck by unemployment and poverty that is still visible today.

Costa Rica’s Afro-Caribbean population speaks Creole English, and their language and customs have been protected by the region’s isolation.

The area around Puerto Viejo is inhabited by Talamanca’s indigenous populations and the region vibrates with a mixture of Afro-Caribbean, indigenous, European, and Asian flavors.

Puerto Viejo and Costa Rica’s Caribbean coast enjoy the country’s most unique weather patterns. As you may have heard, two main seasons govern the weather in most of Costa Rica. The rainy or green season extends from May to November, while the dry season is from December to April.

This is not the case in Puerto Viejo or most of the Caribbean coast, however, where it tends to rain through much of the year. The Rainy season in Puerto Viejo usually extends from November to January and once again from April to August. January sometimes brings heavy rains and flooding to the Caribbean slope.

February and March are usually drier months in this region and September and October are considered the Caribbean dry season when all-day sunshine is generally guaranteed.

Activities & Things to Do in Puerto Viejo: Surfing, Cycling and Beach-time in Foodie Heaven

Puerto Viejo is the Caribbean’s most visited beach town, and many reasons bring tourists here. Some may be working their way to the famous Panamanian archipelago of Bocas del Toro, located a few hours from Puerto Viejo. Others might come for the surf or simply to relax surrounded by nature.

No matter what has brought you to Puerto Viejo and whether you surf, cycle from one glorious beach to the next, join a yoga class or follow a lush jungle trail down the coastline you are bound to work up an appetite. But even if your time in Puerto Viejo is spent lazily soaking up the sun, make sure that you leave plenty of time for dining out. When you hit this town you will discover the unparalleled deliciousness of its restaurants, which offer local and international flavors alike, because many different nationalities have converged in this Caribbean paradise in recent years.

Puerto Viejo could just congregate the most delicious flavors that you will find in all of Costa Rica. You can find everything from American or Spanish style breakfasts to mouth-watering Caribbean seafood lunches and dinners covering everything from Thai to Italian to Middle Eastern. For the most amazing Caribbean dishes, including the seafood soup called Rondón, hailed for its aphrodisiac powers, make sure to visit Selvin’s in Punta Uva, located a short 20-minute drive from Puerto Viejo.

In the 1970s surfers started pouring into Puerto Viejo to surf the famous Salsa Brava reef break, which was known as the “Caribbean pipeline.” The 1991 Limón earthquake affected the surf in this area, but Salsa Brava continues to work its magic and is meant for very experienced surfers. The neighboring Playa Cocles also offers great waves and you can usually find surf instructors at the beach waiting to lead you out to conquer the swell. The best time of year to surf Puerto Viejo is November to April.

When you get into town you will notice scores of bikes available for rental. Make sure to take a day or two to cycle down the quiet main strip that links Puerto Viejo to several paradisiacal beaches, including Cocles, Playa Chiquita, Punta Uva, and Manzanillo.

Puerto Viejo is brimming with tour opportunities to keep the entire family busy, and happy! From educational visits to the Jaguar Rescue Center to horse riding tours, snorkeling and diving tours, SUP tours, and even chocolate tours, Puerto Viejo has it all.

Plan a Trip to Puerto Viejo

Puerto Viejo is a cornerstone beach destination that is included in various Costa Rica Escapes itineraries. While we mostly suggest this destination for couples or families with older children, there are a few choice properties here that work for younger families as well.

Puerto Viejo offers some incredible culinary options and a wide range of close by adventures and tours. Cahuita is a smaller, family-friendly version of Puerto Viejo that is located about 30 minutes to the north.

If you want to visit Puerto Viejo, we suggest the Secluded Caribbean or the Tico-Panama itineraries.

We can help you plan a trip to Puerto Viejo and other parts of Costa Rica. Start by contacting us to schedule a phone call.