To visit Costa Rica’s Osa Peninsula is to immerse yourself in nature.

Road infrastructure connecting the Osa Peninsula to the rest of Costa Rica didn’t develop until the late 1970s, and even as tourism has grown, the Costa Rican government has committed to preserving the area’s natural splendor.

That means traveling to the Osa Peninsula is ideal for lovers of wildlife, because there in a small corner of a small country, you’ll find 2.5% of the world’s biodiversity. 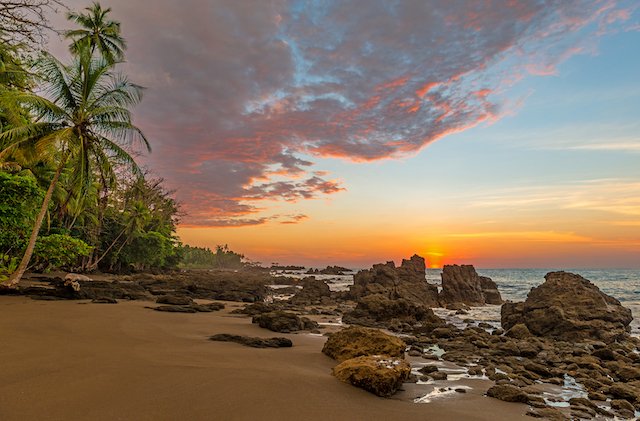 Where is the Osa Peninsula in Costa Rica?

The Osa Peninsula is located in Costa Rica’s South Pacific. Extending into the Pacific Ocean, it is separated from mainland Costa Rica by Dulce Gulf.

Much of the Osa Peninsula is protected land. To the north, the Terraba-Sierpe National Wetlands – containing the biggest mangrove reserves in Central America – is home to a number of bird and reptile species.

Further south is the world-famous Corcovado National Park, which encompasses 42,560 hectares of land (and more than 3,300 hectares of sea) and is perhaps the best place in Costa Rica to observe wildlife.

How to get to the Osa Peninsula

Costa Rica’s infrastructure has improved since the 1970s, and there are now plenty of ways to get to, and around, the Osa Peninsula.

If you have a rental car, you’ll find paved roads from San José to either Sierpe or Puerto Jimenez, towns on opposite sides of the Osa Peninsula.

Route 34 (known locally as the Costanera) follows the Pacific Coast through Palmar, where you can turn right onto Route 223 and take it through farmland until it ends in Sierpe. Or, continue on the Costanera for 30 km until it intersects with Route 245, a paved road to Puerto Jimenez.

Most other roads through the Osa Peninsula are not paved, and some require river crossings, so keep that in mind as you plan your travels. River crossings make the road connecting Sierpe to the beach town of Drake Bay downright dangerous during the rainy season, for example, so it’s a much better idea to take one of the twice-daily boats from Sierpe if you want to visit Drake Bay.

You can also fly to the Osa Peninsula. Several regional airlines operate in Costa Rica, and there are airstrips in Palmar, Drake Bay, and Golfito. Flying is an excellent way to enjoy the Costa Rican landscape from above and reduce travel times from San José.

If your ideal vacation involves luxury resorts and a mixed drink at the beach, the Osa Peninsula might not be for you (but check out our 7-day and 10-day vacation itinerary ideas instead).

But if you’re willing to sweat and are an avid explorer who loves adventure, Costa Rica’s Osa Peninsula can be a once-in-a-lifetime experience.

Corcovado National Park has five different sectors and dozens of miles of hiking trails which are excellent for spotting wildlife in Costa Rica.

Due to the park’s massive size, visitors are required to enter Corcovado National Park with a certified guide. They are experts at finding wildlife as you walk.

In Corcovado National Park, you might see jaguars or other jungle cats, four different species of monkeys, tapirs, coatis, sloths and much, much more. The ocean near Corcovado is also home to bull sharks, which can sometimes be spotted from shore.

You can take a day trip to Corcovado, or stay multiple nights at the Sirena Ranger Station to do more exploring. 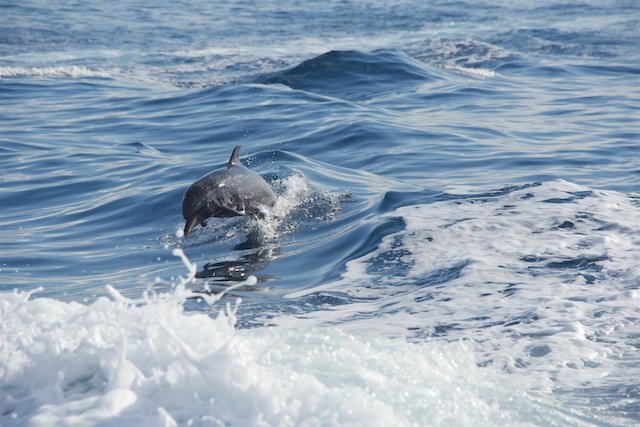 The warm, calm waters of Dulce Gulf make it an excellent location for underwater wildlife.

Female humpback whales give birth in Dulce Gulf, and you have a good chance of seeing the massive mammals nearly year-round since the Osa Peninsula is part of migration patterns for both northern and southern humpbacks.

Dulce Gulf also is home to a number of different dolphin species.

If you want to get in the water, Caño Island – located about 20 km off the coast – is a stunning scuba or snorkeling destination, where you’ll see coral, sea turtles, reef sharks, rays and countless fish. Tours to Caño Island depart regularly from the towns of Sierpe and Drake Bay.

Surfers from across the world love Costa Rica, and that’s partly due to the Southern Zone.

Playa Matapalo, located about 30 minutes from Puerto Jimenez in the Osa Peninsula, is home to consistently strong waves. Across the gulf is Pavones, which boasts one of the longest left-hand waves in the world.

Golfito and Puerto Jimenez are also hubs for sportfishing. Even if you’re a veteran angler, you’ll enjoy the area’s relatively undisturbed waters and the fishing community that has developed in the area, particularly in Golfito.

Hiking in the Osa Peninsula 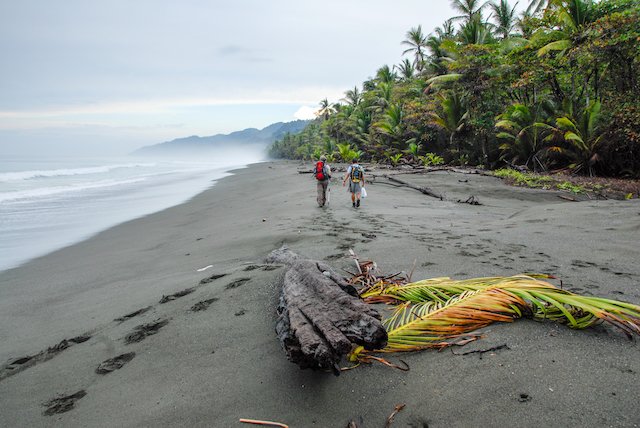 Drake Bay, one of the Osa Peninsula’s best-known beach towns, has a lesser-known public hiking trail that takes you through the rainforest and along the ocean until you reach the immaculate San Josecito Beach.

It’s quite the trek – you’ll spend a full day walking there and back if you do it all–but there are plenty of small, secluded beaches along the way.

You’ll also cross Rio Claro, where you can rent kayaks to explore the Osa Peninsula from the sea. Legend has it that ancient Spanish shipwrecks and their treasure are buried in the area.

If you’re interested in the area’s history, “Finca 6” (Farm 6) near Sierpe is an archaeological site where you’ll see the large, mysterious pre-Columbian spheres for which Costa Rica is known.

When to visit the Osa Peninsula

Regardless of when you visit the Osa Peninsula, be prepared for heat. Daytime temperatures regularly hit the mid-80s, even during the winter, known as the rainy season.

That rainy season generally runs from May to November, and it’s drier between December and April. Be aware that some unpaved roads in the Osa Peninsula may become impassable during wetter months.

Even during the green season, though, you’ll typically get plenty of sunshine from the early sunrise into mid-afternoon. And the rain makes it more likely that you’ll see certain types of wildlife, too.

The Osa Peninsula in Costa Rica: A summary

As the world gets more crowded, places like the Osa Peninsula become increasingly rare.

Fortunately, Costa Rica has made efforts to protect what many consider to be the most biologically intense place in the world.

That’s what makes the Osa Peninsula special and a visit worthwhile. You may not find luxury there, but that’s not such a bad thing.

The Osa Peninsula is a reminder of the wonder of nature, and the importance of protecting what’s left of it.

Plan a Trip to the Osa Peninsula!

Contact us using the form below to begin discussions about incorporating the Osa Peninsula into a custom itinerary for your family vacation, honeymoon, adventure vacation or custom vacation.