Every town in Costa Rica has a soccer field right at its heart, but what makes Pavones pulse is not soccer. Instead, it’s surfing one of the longest left waves in the world, which unfolds right in front of the center of town.

This remote area, literally at the end of the road on the southern side of the Gulfo Dulce, is a melting pot of cultures and origins, all driven by a passion for surfing. Pavones was virtually undiscovered until the mid-1970s, when a controversial history started to develop with the arrival of surfer Dan Fowlie, a US citizen who slowly managed to buy more than 20 km of beachfront land, turning Pavones into his own private surf paradise. 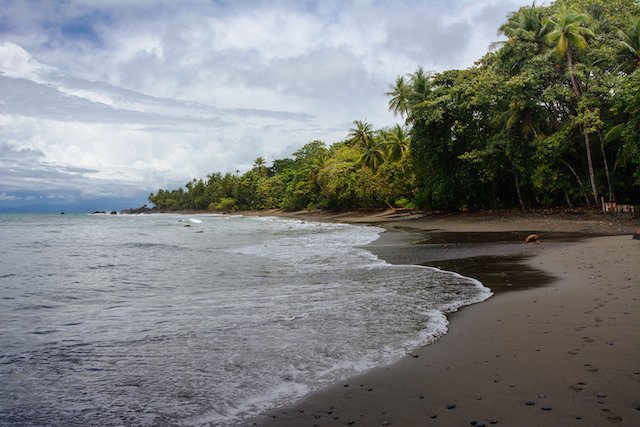 Today, Pavones is inhabited by many people from all over the world, keeping the place interesting and controversial. A love for the ocean still glues the town together, but the freedom to live outside the box in a wonderful natural place is also central to this community’s way of life. A new generation has been born under that creed, turning some of them into champion surfers!

Even though it’s still currently a small town, Pavones offers visitors all kinds of accommodations and activities to just about everybody and not just the backpacker surfer. This is a great destination for travelers who want to experience a perfect landscape where the power of the ocean and tropical forest collide.

Fowlie & the Battle for Pavones

Dan Fowlie was 41 when he bought his first property in Pavones, then a small and poor fishing community. By 1982 he had purchased 14 different farms which made him the owner of 80 percent of the town and over 15 miles of beachfront land, from Río Manzanillo to Punta Banco. Fowlie claims that during the time he lived in Pavones, he helped the town grow by employing families in the area to build schools, churches, homes, roads, bridges and more, using money that he made producing and selling women’s handbags.

But, in 1985, Fowlie was arrested and in 1991 convicted of 15 drug-trafficking charges, spending 18 years in prison. During those years, the land that he once reigned over was put up for grabs, and many people claimed ownership. Pavones became a battlefield for land acquisition between many different players, from ex-employees of banana plantations–which were abandoned by the United Fruit Company around that time–to Pavone’s natives and even Fowlie’s helpers. Ever since the land has been sold and even expropriated by the government.

In 2005 Fowlie tried to come back to Costa Rica to recuperate what he once owned. Yet to this day, he hasn’t been granted any ownership of land in Pavones, and many believe he never will.

Titled by many as the “second-longest left break on the planet,” this world-class wave is considered to be a fairly consistent break since almost half of the year it has the right surf. Most of the time, the wave has a length of 300 to 500 m, but when the southern swell is big, it can be as long as 800 to 1000 m, giving skilled surfers the opportunity to ride for as much as 2 minutes on these fast and intense waves.

The wave begins right at the center of town, and many people joke that when it’s good, one should hire a cab to bring you back to the beginning where a line of surfers awaits their turn to ride it. Be aware that the water can be very crowded during the really good days since many Costa Ricans from nearby areas join the many locals that also want to surf. The best time of the year for surfing Pavones is during the rainy season (from May to December), when there are more southern swells.

Besides the big wave of Pavones, surfers can also enjoy very good surfing in plenty of other nearby beaches. North of Pavones there are good waves at Cocal Amarillo o Punta Saleas, El Higo and Las Gemelas beach. South of Pavones, Chocuaco, and Punta Banco are well-known for their good surfing both lefts and rights.

What to Do Besides Surfing in Pavones

Even though Pavones is quite remote and mostly visited by surfers, the community has organized itself to host many other interests, as long as it’s in sync with their love for nature and the ocean.

One big attraction is offshore sportfishing, targeting key species like sailfish, marlin, and roosterfish. There are also more common activities like canopy tours and horseback riding in the forest and along the beaches. One can even arrange a spa treatment or a yoga session.

One of the best activities that one can enjoy in Pavones is strolling the long and beautiful dark sand beach (not only in Pavones but also the many other beaches nearby). Even though there are a lot of rocks on the beach, one can always find a private corner to relax and sunbathe.

Finally, if you want to take a dip in a more relaxed environment check out the Río Claro, another important natural feature of Pavones cutting the town and beach right in the middle where the famous wave starts. The river has a lagoon where families with children can enjoy tropical swimming.

The newest of all attractions in Pavones’ area is SUP or stand up paddle-boarding. There are plenty of beaches near Pavones that offer amazing slower and smaller waves offering a perfect setting to learn or practice this fairly recent ocean activity. Or, if you are already an expert SUP-er, riding the long and famous Pavones wave is also a possibility.

Dining is not as limited as one would think (being this far away from…anything). The wide diversity of origins of Pavone’s inhabitants have helped to develop a healthy blend of places to enjoy both Costa Rican and international cuisine.

How to Get to Pavones, Costa Rica

The easiest way to reach Pavones is flying into the town of Golfito on the inside of the Golfo Dulce and then driving for 1.5 hours south (about 60 km between the two towns). This drive offers a perfect example of what it means to drive in rural Costa Rica. You will have to drive on paved, gravel, and muddy roads, and cross rivers…even one on a very old looking ferry! You will know you are in Pavones when you finally hit the plaza and see the beach and the big wave right in front of it.

Driving from San José can take up to 8-9 hours, which includes a drive towards Golfito or to Paso Canoas at the border of Costa Rica an Panama, and then a drive south to Pavones.