The province of San Jose can be found in the center of the country bordered by Heredia and Alajuela to the north, Cartago and Limon to the east, and Puntarenas to the west. It covers 4965 km² and has the largest population with just around 1.6 million inhabitants making up 35% of the country’s population.

The layout of San Jose roughly follows the Cordillera Central where Costa Rica’s most significant volcanoes are located. Consequently, San Jose’s landscape is made up of some of the highest peaks in the country interrupted by high elevation plains. 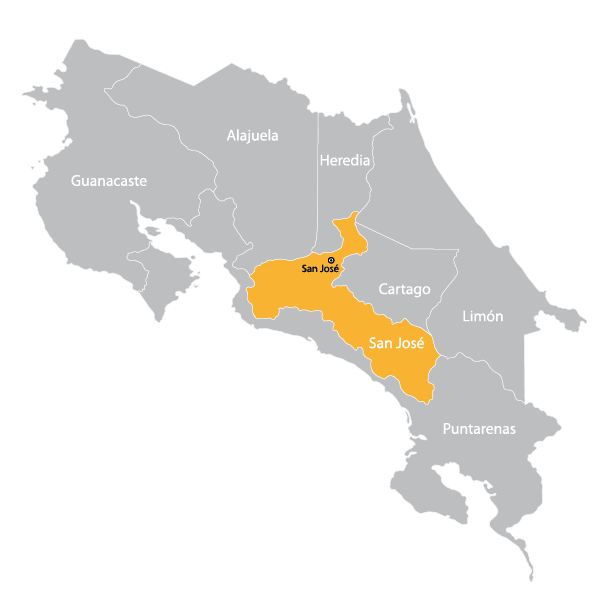 With such diversity in ecosystems, Cerro de la Muerte is blossoming with life. This area is known as a key bird refuge with approximately 260 species of birds. If you want to enjoy a hike around and see what wildlife you can spot, there are a few hiking trails available.

The many different elevations of this province result in distinct microclimates but altogether the area averages out to roughly 68°F (20°C). In fact, San Jose is generally considered one of the coldest provinces within Costa Rica. Unlike other parts of the country, San Jose does tend to follow the summer/winter, dry/wet season breakdown (as discussed in our When to Visit Costa Rica article), with summer (or dry season) going from mid-December through June and winter (or wet season), lasting from June through mid-December.

Up until 1823 San Jose as a capital city had taken a backseat to Cartago, the previous capital of Costa Rica. This young Central American city in comparison to its counterparts has (over time) become one of the safest cities in all of Central America. Coffee, one of Costa Rica’s main cash crops grew significantly in the 1840s and provided for much of the country’s economy in the 19th century.

During the 20th century, San Jose grew significantly both in population and in size. Much of this is thanks to San Jose becoming a transportation highway to the Atlantic and the Pacific coasts. One reason San Jose has become a popular destination for tourists is that this city hub, and the whole country really, has an overarching love for peace and democracy.

For over 50 years, Costa Rica has by choice decided to have no army. The country has even set up a system of social support for the country by providing a good education and generalized healthcare for its people. Costa Rica now boasts the highest literacy rates in all of Central America and one of the best in Latin America.

What to Do in San Jose

The capital city of San Jose hosts many local attractions such as Teatro Nacional, Catedral, Teatro Melico Salazar, and Museo Nacional; all of these are within walking distance. If you are looking for nature, Parque Morazan, La Sabana and Parque Nacional are beautiful green spaces to relax under the shade of a tree and take in the sites and people. To soak in the culture of San Jose take a stroll around some of the historical neighborhoods dotted with colonial mansions, galleries, and restaurants.

As one would expect in a capital city, all of the government offices are based in San Jose including Seguro Social, la Casa Amarilla (Ministerio de Relaciones Exteriores), and the Banco Nacional. While you typically would not see large city buildings in this city, this has been changing as new building towers are being built to make room in this growing city.

In some ways downtown San Jose hasn’t changed much in the last few decades despite its efforts to improve its infrastructure of boulevards, pedestrian, and subterranean electricity lines. While the city is still a bit outdated, there is a slow renaissance movement happening. The Cultural Ministry of San Jose is participating by adding exciting things to do with a series of free and public workshops and events. Beer drinkers will also delight in new microbreweries popping up to diversify the beer market, which for decades has been saturated by one company.

The population of San Jose is centered primarily in the capital city. Josefinos or Josefinas (as people from San Jose are called), historically were “white” from Europe, but these days there is a greater mixture of people. People in San Jose tend to be thought of as being metropolitan by staying up to date on the fashions and local trends. Like other cities around the world, you will find a wide array of people in San Jose from scholars to tattooed folks, reggae lovers and gothic groups.

In the city of San Jose, just about any type of food is available to you from Indian to American-style fast food to Mediterranean cuisine. But, throughout the whole province, the most widely prepared dish is the casado, which literally means, “the married one”.

Usually served on an oblong dish to accommodate the large portions, this dish includes a mound of rice, along with beans, some kind of protein (chicken, fish, fried cheese or beef chips smothered in salsa are the most common), a picadillo (literally “little diced” veggie dish), and a salad. A fresh-squeezed or blended fruit drink on the side completes this dish.

In just a decade, the average cost of a casado has increased considerably demonstrating what an expensive country Costa Rica is becoming, but it is still the most common dish in Costa Rica.

Being a mostly Catholic country, Costa Rica’s event calendar is full of Christian festivals year round such as the Holy Week in April. Tourists can expect to see many businesses closed down during this period of time. A unique time to visit San Jose is right after Christmas where the city hosts an elaborate two-day carnival for families.

There are plenty non-religious festivals happening in San Jose such as Costa Rica’s Independence Day in September where locals celebrate their annex from Nicaragua and Spain in 1821. As Costa Rica has no armies, the Independence Day parades are performed by students. Children dress up in their national costumes carrying a mock torch which symbolizes the country’s independence from Guatemala in 1821.

Considering a Trip to San Jose?

While the pre-designed Costa Rica Escapes itineraries do not include specific stops in San Jose, these are easily and often added as parts of a custom itinerary for clients with a special interest in visiting San Jose.

There are some select hotel properties and bed and breakfasts in the city that offer a great base to explore the capital. If you have a day or two to explore San Jose, we suggest taking a city tour with one of our local, bilingual guides. Along with the historical facts, he/she will be able to give you a local’s perspective and insiders look to the most populated city in the entire country.

Fútbol (aka “soccer”) is king in Costa Rica. If the opportunity happens to present itself, we suggest going to a game. The Costa Rican National team plays in the newly constructed and state of the art Estadio Nacional on the west side of the city in the La Sabana area. Aside from the National Team, there is a very popular professional club league that plays throughout the year, too.

Let us know where you’d like to go and we’d be happy to put together a memorable vacation itinerary for you.